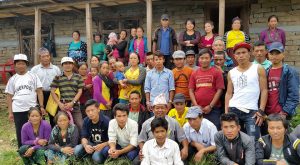 In 2013, approximately 200 farming households from four villages (Tawal, Dusheni, Ladap and Tawal Besi) in the Ri VDC, Dhading district pooled their cash and ‘in-kind’ labout to purchase land and establish the Pasang Chowk Agricultural Co-operative. Their aim was to grow higher value cash crops, up-scale their animal raising, and adopt more modern and innovative farming methods. The Co-operative members built a stone wall around the land, a  caretaker cottage and two sheds for chicken raising and egg production. A caretaker was employed and a community savings program established.

The Gorkha earthquake in April 2015 destroyed all of the Co-operative physical assets and 700 chickens. Villagers then faced a massive challenge not only to rebuild their homes and community infrastructure, but also to re-establish the Cooperative in which they had invested so much energy and savings.

Following the earthquake, NAFA committed to help rebuild schools in four villages in the area and the health clinic at Tawal, as well as classrooms in five other villages elsewhere in Nepal. Earmarked donations from generous NAFA supporters allowed us to allocate $15,000 to rebuild the two chicken sheds and caretaker’s house, as well as reconnect electricity and water to the land owned by the Co-operative. 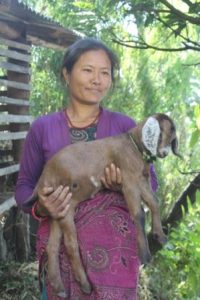 But much more was needed. NAFA has partnered with the English Family Foundation (EFF) to provide Co-operative members with the potential for a sustainable future. A generous grant of $23,106 from EFF provided the opportunity to really help the Co-operative get back on its feet. The grant was used to provide training in cardamom and coffee growing, and goat rearing. Funds were also used to purchase 20,000 cardamom plants, 700 chickens and 10 higher value Jamuna goats. Solar lights were installed in the chicken sheds and farmers gained access to locally available veterinarian services. These initiatives have made a huge difference to the morale of villagers who have lost so much.  Their vision of crop diversification and improved animal husbandry through Co-operative farming is being realised.

Partnerships with like minded funders for community development projects are welcomed by NAFA. If you would like to discuss possible partnerships with NAFA, you can contact Rod Setterlund, President of NAFA via email setterlund@hotmail.com.

Donations to help us complete the rebuild would be much appreciated   http://nafa.org.au/donations