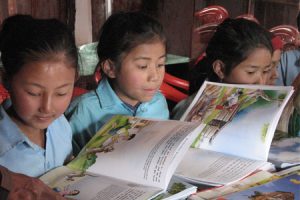 Our focus is on economically disadvantaged families and communities in the following remote villages and towns in Nepal:

In 2008, NAFA introduced a Further Education and Training (FEAT) program to provide post Grade 10 educational/vocational training support to sponsored students in VSN school and PA Nepal with the aim of helping them secure their first job. The FEAT program was expanded to include support for a limited number of students each year from Pasang Chowk Higher Secondary School in Tawal, Ri VDC, Dhading district.

NAFA’s Child Sponsorship and FEAT programs are now capped due to ongoing sustainability issues. However, the opportunity to sponsor a student still exists. Some remaining students who need to complete their studies require new sponsors, due to the naturally occurring attrition of sponsorship. Enquiries about potential sponsorships are therefore always welcomed.

NAFA supports three child care centres in Nepal where pre-school children are provided with early learning opportunities and basic care, including food and health check-ups. One centre in Thimi targets children of low income families who originally came from rural villages and now work in two local carpet factories. Two centres in Pokhara target subsistence farming families who have had to move from remote villages to Pokhara to seek casual day labour.

Shree Seti Devi Primary School is situated on a hill above the village of Shivalaya and educates children from playgroup to Grade 6. School after the earthquake NAFA has been involved with [...]

Over 180 students attend Shree Rampur Lower Secondary School which has 10 classrooms and an office and educates children from playgroup up to year 8. Completing the foundations NAFA started assisting this school [...]

Over 340 students attend Shree Patle Higher Secondary School which has 15 classrooms and an office and educates children from playgroup up to year 10. Preparing the land and retaining walls NAFA [...]

Villages provide volunteer labour towards rebuild of their community infrastructure

Clearing school site at Patale NAFA always expects volunteer contribution from villagers in all funded projects. This engenders the spirit of partnership and ownership within communities and helps drive NAFA’s hard earned donations [...]

Practical training with stone mason It has been the year of rebuilding remote village infrastructure following the devastating  earthquakes in 2015. NAFA allocated $448,000 to earthquake related projects in five districts of Nepal: Dhading [...]

Read More
12Next
Go to Top