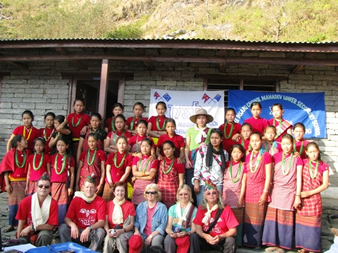 The Nepal Australia Friendship Association (NAFA) was formed in 1989 following Expo 88 in Brisbane, Australia. Since then, NAFA has grown steadily into a totally volunteer-run, medium size incorporated charitable organisation.

In 1994 NAFA obtained tax deductibility status which means that all donations to NAFA are tax deductible for Australian donors. This status, combined with the introduction of a child education sponsorship program and a decision to allow donors to earmark their donations for specific projects, resulted in an increase in annual donations to an average of just over $100,000 in the lead up to 2015. NAFA’s project portfolio has built up over the years, comprising both one-off and annually funded education, health, micro-hydro electricity, water and village infrastructure projects and programs.

In 2015 two earthquakes devastated Nepal, death and destruction was widespread. Amongst the many thousands of houses and buildings that were destroyed were eight schools, a remote health post and other village infrastructure that had been built over the years by NAFA and other like-minded partner funds. Over the following three years more than $900,000 was raised by NAFA from generous donors and philanthropists to rebuild earthquake damaged infrastructure.

NAFA has continued to support its ongoing program commitments although a sunset clause was introduced to its child sponsorship and Further Education and Training (FEAT) programs. In 2019, Sungava Home for Young Women with an Intellectual Disability was added to NAFA’s portfolio of annually funded programs.

When Covid-19 struck in early 2020, many of NAFA’s fundraising activities such as our annual dinner and market stall have been curtailed. The annual visits to Nepal by NAFA’s senior executive officers have also been suspended.

NAFA was formed in 1989 after the 30 volunteers from the Nepalese pavilion at Expo 88 wanted to help underprivileged people in Nepal and form friendships with the small Nepalese community in Brisbane.  Today [...]

Memories from the Past

Memories from the past Rajani and her daughter Salika at Nepal in the Park We migrated to Australia with our children in 1992. It was a new life for us and we [...]