The earthquakes that struck Nepal in April & May 2015 caused a terrible loss of life and devastated much of the country. 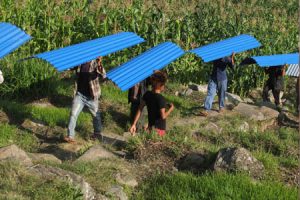 As well as the capital, many rural and remote villages were hit badly.

Homes were damaged or destroyed and in a number of regions, NAFA supported projects such as schools and health clinics were also hit badly.

NAFA is resolved to help these poorer communities rebuild their basic infrastructure.

In June 2015, with the help of the Nepalese Association of Queensland (NAQ) and other like-minded NGOs NAFA responded to the immediate needs of earthquake victims by providing roofing tin to over 1,200 households in the Dhading (plus rice), as well as to approximately 100 families in NAFA supported villages located in Solu Khumbu and Okhaldhunga districts. Assistance was also provided to the 30 families of sponsored students in Thimi, near Kathmandu. Altogether $95,500, including $37,000 from NAQ, was allocated to four initial responses to the earthquake, including the provision of medical supplies, roofing tin, rice and tents for earthquake victims.

In December 2015, a Memorandum of Understanding (MOU) was signed with the Nepalese Government Department of Education (DoE) to rebuild a total of 48 classrooms in the following villages:

NAFA has also committed to fund the repair of classrooms and/or toilet blocks in the following villages:

Finally, NAFA has also committed to fund the rebuild or repair of the following remote village infrastructure in the Ri VDC of the Dhading district:

Please make a donation to NAFA to help the people of Nepal.

Approximately 250 villagers in Kutal and Tawal have put in an extraordinary volunteer effort to lay concrete slabs for the first floor of their two storey classroom blocks. In Kutal it took 100 men and [...]

What will NAFA do after earthquake rebuilding is completed in 2018?

In mid 2018 NAFA hopes to complete the significant rebuilding commitments it made after the devastating earthquakes in April and May 2015. It will be a big achievement for a small, volunteer run NGO - [...]

Shree Seti Devi Primary School is situated on a hill above the village of Shivalaya and educates children from playgroup to Grade 6. School after the earthquake NAFA has been involved with [...]

Over 180 students attend Shree Rampur Lower Secondary School which has 10 classrooms and an office and educates children from playgroup up to year 8. Completing the foundations NAFA started assisting this school [...]

Over 340 students attend Shree Patle Higher Secondary School which has 15 classrooms and an office and educates children from playgroup up to year 10. Preparing the land and retaining walls NAFA [...]

Read More
12Next
Go to Top