Approximately 250 villagers in Kutal and Tawal have put in an extraordinary volunteer effort to lay concrete slabs for the first floor of their two storey classroom blocks. In Kutal it took 100 men and women to complete the slab work and in Tawal, 150 villagers worked for over 13 hours in the rain to lay the slab. Many women worked under umbrellas to prepare the aggregate for the huge amount of concrete needed for the job. 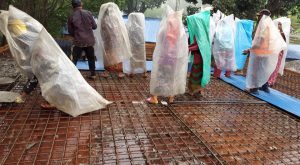 In the words of Kanchha (Tawal teacher and NAFA’s liaison person): “After nine month’s hard work we have finished slab of four classrooms. That day was drizzling rain but ignored by all 150 people to that bad monsoon because for their children getting earthquake proved (proof) building”

Sadit (NAFA contracted overseeing engineer) was also impressed with the local effort: “It was great news to learn that casting of the slab in Kutal has completed … Also the good news was the materials we had estimated and stored (cement, sand, iron rods, and aggregates) were sufficient to finish the task. The remaining cement bags from the store now can be used to plaster the inner walls.”

The second phase of the rebuild in the four Dhading district schools that were all completely destroyed in the April 2015 Gorkha earthquake is progressing well, with official openings of the rebuilt school scheduled for February 2019.

We can be rightly proud of the good partnership we have with all the villages we work with in Nepal.