Over 180 students attend Shree Rampur Lower Secondary School which has 10 classrooms and an office and educates children from playgroup up to year 8. 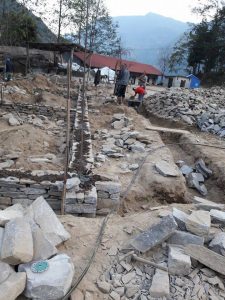 NAFA started assisting this school in 2009 when we funded the building of 2 new classrooms and installation of equipment for the classrooms.

In the second earthquake in 2015 two old classroom buildings were badly damaged and in need of rebuilding. The school advised they would be able to obtain assistance to rebuild one block while they requested NAFA to assist with the rebuilding of the other 3 classroom building.  NAFA committed to help this school with this rebuilding.

The school committee hired local builders and labourers to clear the site of debris to make it ready to commence construction once plans were approved. They also constructed temporary classrooms for the students from materials such as bamboo and tin roofing. 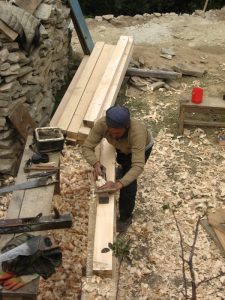 Preparing the timber with hand tools

After attending an earthquake resistant training course on new methods of construction the local builders began work on the foundations of the 3 classrooms which was overseen by a local engineer, Surendra Budhatoki, engaged by NAFA.

He oversaw the construction from the marking out of the foundations, through the different stages of building and finally when the roof truss was completed. 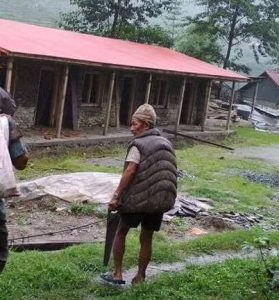 Apart from the regular visits from the engineer, NAFA representatives visited the site in December 2016 and again in January 2017.  The engineer and the school committee provided NAFA with regular reports and photos on the progress of the building.

Nine months after starting work the 3 classrooms were completed in September. NAFA recognises the hard work the builders and school committee have done to complete the building.

NAFA would like to thank the Armidale Central Rotary Club and the Armidale University Cricket Club  for their donation of $11,040 towards the construction of these classrooms.