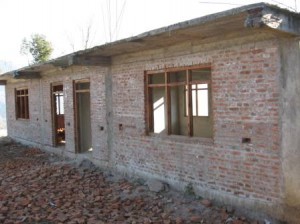 Details:  The school applied for funding to build 2 classrooms to allow the students of year 9 and 10 to split up for optional subjects.  Many schools face this problem since optional subjects were introduced but the classrooms were not increased.  The school had no library or computer room and this is also now an important requirement for schools that go up to year 10.

Outcomes: This application was approved in 2012.  The school built the classrooms with a cement roof to allow them to build a second storey in the future.  This took them over budget as the original application was for an iron roof.  They were advised that any further funds would need to be raised within the community or from other donors.  The school was revisited in December 2013 and again in January 2014 where NAFA was advised that they had raised the funds and would complete the classrooms before the new school year in April.