Report on visit to Shyama, Dolakha

Previous Next
Report on visit to Shyama, Dolakha

Ross and Brenda’s visit to the village of Shyama 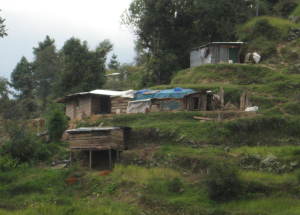 The road to Jiri  is narrow and winds through hills and small villages, the 90km journey took us 7 hours. Due to the fuel problems and many people wanting to travel prior to the upcoming Dashain festival, we decided the safest option was to hire a jeep as we could not rely on the local buses. We left at 6am, had lunch in Jiri and then walked for nearly 5 hours to Shyama, which we reached just after dark.

On the way down as we travelled through the districts of Sindhapulchok and Dolakha we saw many damaged and destroyed homes from the 2 major earthquakes. Next to these were clusters of villages of corrugated iron temporary shelters as well as blue and orange tarpaulins covering animal sheds. There was little reconstruction of the damaged homes, most had been deserted. In some areas there were mini villages of approx 30 shelters.

Jiri is the traditional start for the Everest trek as well as, until recently, the end of the road and so it had many tourist lodges and was a very colourful town. Unfortunately Jiri being near the epicentre of the second earthquake had been hard hit and many buildings had been destroyed. Only three lodges survived, others stood in ruins or in some places there was huge gaps where the rubble had been cleared.

It was wet when we arrived in Jiri and the trail was very slippery so we were glad to arrive in Shyama to hot cups of tea. After a dhal bhat dinner we had a short meeting with the principal and school committee and then slept dormitory style in the headmaster’s home. 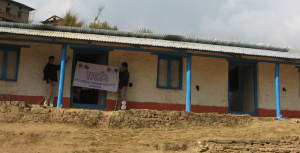 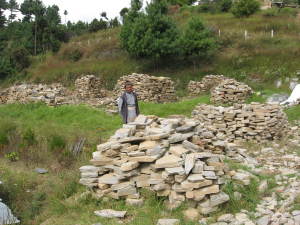 Destroyed classrooms after the earthquake 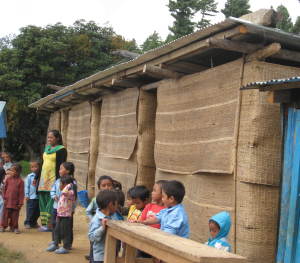 The next morning we had an early meeting with the headmaster, school committee, some teachers and the local builder. Sabin had already drawn up plans from the earthquake resistant guide completed Brisbane based Rara and Marie. He showed them the plans and how to incorporate the new guidelines on his computer which was more effective than describing the plans off a standard drawing. Sabin took them through all the steps in the ER reconstruction referring to the NAFA guide as well. He advised later that he felt they understood the new ER concept of construction. 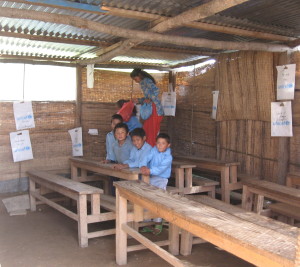 We then toured the school site, where an estimated 30-50% of stone work had been stacked from the rubble for use in reconstruction. The iron off the roof was being used for temporary offices as well as roofing for the temporary classrooms. Matting has been used for the classroom walls. It was a very sad sight but the children were as happy as ever, running around and excited to have visitors to their school. 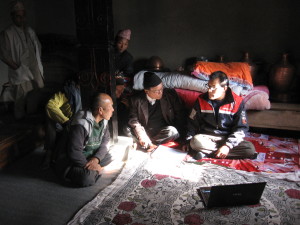 Kusalta and Saskrita taught the children how to make friendship bracelets which was a big hit.

After a short school program of thanks where the children showered us with flower garlands, sang their national anthem and danced, we returned to Nawong’s home for lunch.

Returing to Jiri along the trail it started to rain which made the track very slippery. We arrived in Jiri at dusk, found a lodge and settled in for the night before our return to Kathmandu the following morning.

Update: Since then an application to rebuild these 5 classrooms has been lodged with the Department of Education and we await final approval. A further report will be posted in January after Ross and Brenda’s second visit.