The village of Tawal in the Dhading district was only 15 kms from the epicentre of the Gorkha earthquake in April 2015. In all of the 25 villages in the Tawal area, 100% of the houses and community infrastructure such as schools was destroyed.  The earthquake triggered a number of landslides and brought other rock outcrops to the surface, raising fears of further landslides in the future. 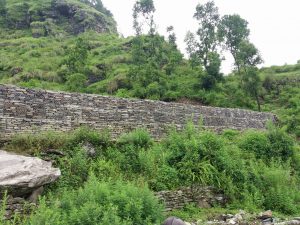 When the earthquake struck, Tawal villagers set up temporary shelters where they felt they were safe from landslide. But they remained concerned about their personal safety and the need for protection of community infrastructure from future landslides.

His recommendations included the construction of two gabion walls: an eight metre high and 50 metre long gabion wall above the school in Tawal; and the strengthening of an existing, old gabion wall above the village.  Nearly $10,000 was allocated for these walls and with some help from the Nepal government, the gabion walls have been completed in time for this 2017 monsoon season.