Previous Next
Nepal Earthquakes 12 months on

to the needs of remote villages so badly affected. 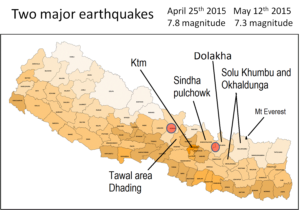 In June 2015, with the help of the Nepalese Association of Queensland (NAQ) and other like-minded NGOs NAFA responded to the immediate needs of earthquake victims by providing roofing tin to over 1,200 households in the Dhading District (plus rice), as well as to approximately 100 families in NAFA supported villages located in Solu Khumbu and Okhaldhunga districts. Assistance was also provided to the 30 families of sponsored students in Thimi, near Kathmandu. Altogether $95,500 (including $38,000 from NAQ) was allocated to provide medical supplies, roofing tin, rice and tents for earthquake victims. NAFA’s is now focusing on the repair or rebuilding of remote community infrastructure (particularly schools) in eleven villages across five districts previously supported by NAFA.

Funds allocated for the repair of school and other remote community infrastructure
NAFA has been ready for a number of months to proceed with a significant rebuild program. However, work has been held up by a slowly evolving range of administrative requirements introduced by the Nepalese government applying to international NGOs (outlined later in this report). Where NAFA has been able to move without going through these bureaucratic hurdles, funds have been allocated and rebuild/repair work is well underway.

For schools, nearly $15,000 has been allocated for repair of infrastructure in five villages. Funds have been allocated in Jalkeni and Jiripur Kadampas in Sindulpulchowk district to repair classrooms and a toilet block. Water infrastructure and classrooms have been repaired in Patale, Okhaldunga and Kophu, Solu Khumbu districts respectively. Materials were provided to strengthen temporary classrooms in Shyama, Dolakha district. Finally, $6,000 has been allocated towards the construction of a gabion wall that will protect the area school at Tawal from landslides.

In relation to other remote community infrastructure, $40,000 has been allocated to rebuild agricultural cooperative infrastructure (chicken houses, caretaker’s shelter and water infrastructure) and repair a damaged micro-hydro system in the Tawal area, Dhading district. 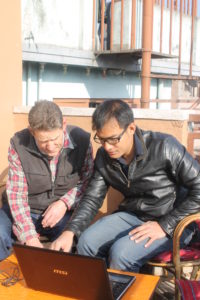 Classroom rebuilding response – challenges faced but a determination to get the job done
Where classrooms in schools have been totally destroyed, the Government of Nepal requires international NGOs to register their offer to helprebuild school classrooms with the Department of Education (DoE) through a local NGO. Memorandums of Understanding (MOUs) with DoE were signed on 15 December 2015 to rebuild a total of 48 classrooms in the following villages:
Dhading district: Ladap (8); Tawal (15); Kutal (8); and Richet (6)
Solu Khumbu: Kophu (3)
Okhaldhunga: Patle (3)
Dolakha: Shyama (5)

Significant bureaucratic challenges and a fuel crisis in Nepal has delayed the start of rebuilding school classrooms. However, we are told by DoE officials that NAFA is ahead of other INGOs in progressing rebuild plans in accordance with new government rules and regulations evolving after the earthquake. Earthquake resistant classroom designs and site plans have to be approved by the DoE and the Department of Urban Development and Building Construction (DUDBC). This has proved very challenging due to changing government building codes, limitations in the land space available in some villages and government requirements regarding numbers and sizes of classrooms required for primary and secondary schools.

On top of all the bureaucratic challenges faced, Nepal also experienced fuel, gas and other essential goods shortages for six months in the latter half of 2015, caused by an ongoing blockade by the Madeshi regional political parties unhappy with key aspects of the new constitution for Nepal. Although finished, the blockade inflated prices of petrol, gas, kerosene and supplies, including building materials. Subject to approval by the regulatory authorities mentioned earlier, NAFA’s rebuilding phase can only commence when both supply and prices are normalised, though it has been predicted that prices will not return all of the way to pre-earthquake levels.

In at least three villages in the Dhading District, additional private land will need to be purchased as the current school sites are inadequate for the number of classrooms and classroom sizes now mandated by the government. The government has not given any indication that it can assist with any funds to help with either the purchase of additional land or the rebuilding of classrooms in any of the villages in which NAFA has offered to help with rebuilding. 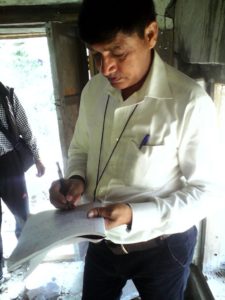 In Ri VDC NAFA had to organise a geotechnical engineer (Professor Megh Dhital from Tribhuvan University) to travel to the area to undertake a “rapid assessment for landslide risk” of 25 villages in the VDC to provide advice on where it is safe to rebuild and where it isn’t safe. His assessment undertaken in early December 2015 for landslide risk was a major breakthrough for which the people of that area and NAFA will be forever grateful.

Local builders in the eight villages where schools will be rebuilt with NAFA funds need to be trained in earthquake resistant building techniques. NAFA has signed a contract with a Nepalese government accredited engineer/trainer and two seven day training programs will be conducted as soon as the upcoming monsoon season is over in the areas where NAFA is supporting the rebuilding of classrooms. The contract includes a provision for monitoring the construction of the schools at key milestones such as after the laying of the foundations, before the roof is put on and after construction has been completed. The cost of the training and monitoring will be nearly $20,000.

Funds have been allocated to start the rebuilding
In spite of the above challenges, NAFA has started allocating funds for the rebuilding of classrooms. $216,000 has been allocated thus far to rebuild twenty classrooms in six villages: Kophu, Patle, Shyama, Ladap, Tawal and Richet. Nearly $40,000 has been allocated to rebuild agricultural cooperative infrastructure, repair a damaged micro-hydro system and towards the construction of a gabion wall that will protect the area school at Tawal. NAFA supporters can be assured that the rebuilding of these twenty classrooms will commence as soon as possible, following final DoE and DUDBC approvals, and the completion of the earthquake resistant training programs for local builders. .

The above funds have been transferred to Nepal and some funds have been released to purchase sand and to collect and cut stone. The remaining funds will be released at the end of this upcoming monsoon season upon the completion of earthquake resistant training.

Future plans and estimated funds needed to meet current NAFA commitments
NAFA is further committed to help rebuild (with the help hopefully of a few other small, like-minded organisations) another twenty-seven classrooms as well to rebuild a remote area health clinic in Tawal that services five local villages.

Currently, we estimate that we are $200,000 to $250,000 short of the funds needed to complete our rebuilding/repair commitments. If you would like to help reduce that shortfall you can make a donation towards NAFA’s earthquake appeal via its secure website www.nafa.org.au/donations Donations are tax deductible and we guarantee 100% of your donation will go direct to our rebuilding efforts in Nepal. If your donation is greater than $1,000 and you would like to have your donation acknowledged on the outside wall of a classroom, please email me on setterlund@hotmail.com after making your donation.

Thank you for helping NAFA help local villagers in Nepal rebuild their lives after the devastating earthquakes of 2015.