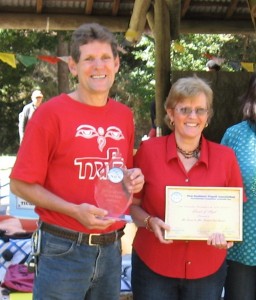 At Nepal in the Park, Ross and Brenda Hazelwood were presented with the prestigious Friend of Nepal of the Year 2009-2010, awarded by the Non-Resident Nepali Association (NRNA). Mr Narayan Pokharel, President of the Nepalese Association of Queensland (NAQ), presented the national award on behalf of NRNA and NAQ, who had nominated Ross and Brenda for the award.

This is a joint nomination of a husband and wife team, Ross and Brenda, who for over 20 years have dedicated their time and talents to improving the lives of disadvantaged people in Nepal, as founding and still very active members of NAFA.

Ross and Brenda spend 7 months of the year in Brisbane helping to organise NAFA’s fundraising events (including a Nepalese New Years fundraising dinner and Nepal in the Park) and activities such as market stalls. Brenda is Vice President of NAFA while Ross holds the positions of Secretary and Nepal Project Coordinator.  In addition to these roles, Brenda uses her skills in craft work to make cards and jewelry to sell at NAFA stalls. She also set up NAFA Knitters, a project which involves approximately 80 women knitting jumpers and beanies for children in poor families in Nepal. 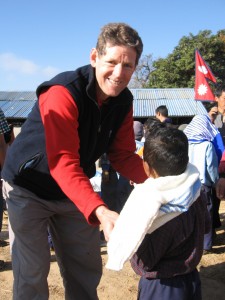 Ross also updates the child profiles of approximately 35 children sponsored for education by NAFA at Prisoners Assistance (PA) Nepal. For several years Brenda has played an important role for the children at that home by conducting a craft program which teaches the children to sew, knit, and make jewelry – often a lovingly made item goes to their parent in prison. Brenda believes craft work provides skills for life.

With Ross’s support, Brenda also coordinates not only the distribution of jumpers and beanies in Nepal, but also the purchase of goods for sale at NAFA market stalls back in Australia.  Brenda also sources beads and material from retail shops in Kathmandu to create jewellery, felt items and other saleable items for the markets, which brought in almost $10,000 for NAFA in 2010. 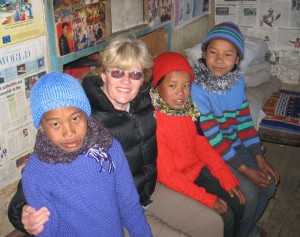 The kind recognition by NRNA and NAQ has provided a unique opportunity to acknowledge a couple, Ross and Brenda who have a deep respect for Nepal and the Nepalese people and culture. They have committed a significant amount of their time, energy and their own resources for over 20 years to support disadvantaged people in Nepal.  Without each other’s support they wouldn’t have been able to achieve what they have and NAFA is very proud and wishes to congratulate Ross and Brenda for winning this prestigious award and thank NAFA and NAQ for the recognition of their contribution to helping disadvantaged people in Nepal.