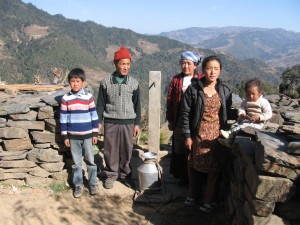 Location: Okhaldunga district, 4 days walk from the airport village of Phalu or the roadhead at Jiri
Partner: Patale Village Development Committee
Beneficiaries:  Patale, surrounding community and school
Objective:  Water infrastructure project that would give improved water flow into village to 39 houses, 400 residents and the local school currently.
Details: NAFA members visited the village in January 2009 and received an application to fund a new water infrastructure. They advised the intention was to construct a wall around the original water source to stop animals from contaminating the water and allowing more to flow into the top tank. Another pipeline next to original would be laid to double flow to the 10,000 litre reserve tank.  This would also ensure more water to the school to cope with the increased demand when the new classrooms are completed and student numbers increase.  Nine tap stands around the village were to be constructed for washing and bathing.
The application was for cement and materials = 336,550 Nrps = $6,731. All labour for the laying of the pipes and erecting the water tanks and taps would be unpaid work by the villagers as their contribution to the project.

Outcomes: This application was approved at the March 2009 meeting and funds sent to Nepal through the Joy Foundation.  The funds were paid out in stages as the villagers completed the work and reported back to NAFA. In February 2010 a group of NAFA members visited the village and were impressed with the work that was completed and how having easier access to water made such a difference to the lives of the residents.