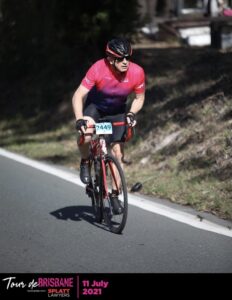 “Mission Accomplished …… on Sunday 11th July 2021, I completed my ‘Everest Challenge’ and the ‘Tour de Brisbane’.

I took part in the Tour de Brisbane on 11th July in order to raise funds for Sungava Home for Young Women with Intellectual Disability which is one of NAFA’s ongoing health, disability and education commitments in Kathmandu. As part of my training program, that extended over several months, I set myself the additional goal of climbing the equivalent in height of Mount Everest (8,848m).

Due to the postponement of the original Tour date in April, my training program was extended for some months longer than I had anticipated. As a consequence, I smashed my goal of ‘climbing’ Everest. From the beginning of January to the Tour on 11th July I clocked up over 18,000m in altitude, which is more than double the height of Everest. The Tour de Brisbane itself involved a course of 110km and a recorded 1,560m of climbing on the day.

My sincere thanks to everyone who supported me in this endeavour and particularly those who gave so generously to this fundraising effort in support of Sungava Home. Our Treasurer reports that we have raised $9,592 (as at 25/8/21) which is fantastic news. So, if you were waiting for me to cross the finish line before donating …. the time is now!

For those who have already contributed, on behalf of the young women at Sungava Home together with their families and carers, I thank you most sincerely.”

If you wish to donate in support of Sungava Home, you can do so easily through the GiveNow link on our Donations Page.