Nepal in the Park Festival 2016

Previous Next
Nepal in the Park Festival 2016 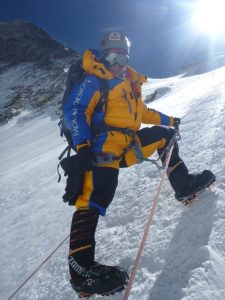 Alyssa on the Lhotse face

It was a wonderful celebration of Nepalese culture and everyone had a chance to meet our special guest. On 21 May 2016 at the age of nineteen, Alyssa stood atop the world’s highest peak. This followed two previous attempts in 2014 and 2015. The 2014 attempt was stopped by a terrible avalanche that killed sixteen Nepalese guides in the Khumbu icefall. Alyssa was also at base camp in May 2015 when an earthquake triggered an avalanche that killed another 18 climbers. No doubt Alyssa’s “can do” attitude, combined with her physical and mental strength and love of adventure helps her to achieve her goals at such a young age.

On the day of the event, Alyssa and her father Glenn generously gave their time, signing autographs and joining in selfies. Alyssa was introduced to senior members of both the NAFA and NAQ collective family. She also participated in a Q and A interview with NAFA’s President, Rod Setterlund and people in the audience.

Alyssa talked about how she first became interested in climbing and where she sharpened her technical climbing skills. She talked about her impressions of Nepal, and the Nepalese people, on her first visit to the country. She also spoke warmly of the Sherpas who helped make her summit attempt successful. The children in the audience wanted to know how many layers she had to wear during the climb (3) to keep her warm in the minus 40 degrees Celsius near the top. Alyssa’s presence at this year’s Nepal in the Park was clearly a big hit!

As always Nepalese cultural activities were popular with the crowd. Traditional dances performed by Nepalese children were a delight, and of course the delicious Nepalese food, all donated by the Nepalese community in Brisbane, had people lining up for more. Nepalese cooking demonstrations, Nepali handcrafts for sale, raffles and activities for the kids, including a donut-eating competition, face painting, eyebrow threading and henna, a spoon race and a piñata provided plenty of interest and fun. The “massage corner’ helped walkers and others recover from muscle soreness following the fundraising walk that started off the day.

Each year the NAQ and NAFA community come together to volunteer their time and skills, and in the case of the Nepalese community also the food, to make sure the event is a huge success. Thank you to all our dedicated volunteers and faithful supporters who come on the day to have fun and importantly raise funds to help Nepalese villagers recover from the 2015 earthquakes.

And yes, it was a lovely sunny Queensland morning … thank goodness.

For anyone who missed the day and would like to make a donation to our earthquake appeal, you can do so on the secure NAFA website: www.nafa.org.au/donations