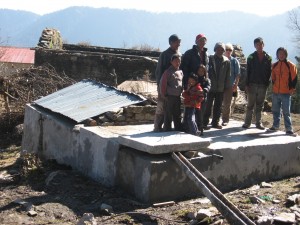 Villagers at the storage tank

Details: NAFA members visited the village in February 2010 and were advised that the old water supply was reducing and drying up in winter.  As there is less water to drive the hydro they are getting only about 1 or 2 hours electricity  a night. They asked for funds $840 to purchase additional piping to what they had already purchased with their own & VDC funds for a new water source tank.  Secondly, 2 water tanks were originally built but there was only enough money to seal the inside of one tank with cement.  The second tank was sealed in wood which was rotting and contaminating the water suply.   The community submitted an application for $1,725 to correct this problem. 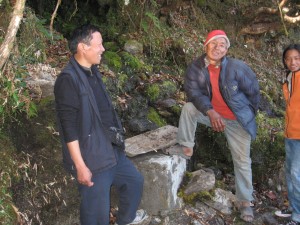 Outcomes: The request was approved in March 2010 meeting and in January 2011 the village was again visited by NAFA executive  members who inspected the new water source and pipeline.  They also saw the new cemented  tank used for drinking water and for release of water at night to run the turbine to produce the electricity.  This has improved their evening electricity, the women are able to cook more safely and the children are able to complete their homework after their farming chores.