FOR NAFA’S HEALTH PROJECTS IN NEPAL 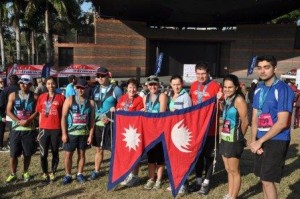 Day break on Sunday 3rd August and Alice Street is abuzz with hundreds of excited runners waiting for the siren to begin their run for the Brisbane Marathon. NAFA is well represented with 15 runners – the Everest Mob. We are all shapes and sizes, young and old, but all motivated by one goal – to raise money for NAFA’s health projects in Nepal. We did our training, slogging it out for months, so the health benefits are a bonus. We know our efforts are supported by hundreds of donors who generously pushed the fundometer to an amazing $13,000. Our support team cheer us home. Great relief as we realise we did ‘personal bests’ with no injuries. Time to soothe aching legs, swap stories and celebrate our success.

Dr Sudipta Synnia came up with the idea for a team of NAFA supporters to run the marathon as a fundraiser (see www.nafa.org.au/nafa-calendar). Sudipta is passionate about the need for health care in Nepal: “Having a Nepalese background, I have always wanted to give back to the beautiful country where I was born … being a doctor I was drawn to making a contribution to the health care sector in Nepal”.

Wanting to help her ‘favourite country’ motivated Kylie to do the half marathon: “We have so many opportunities in Australia with health and education. Giving that similar opportunity to less privileged people in Nepal makes me happy and raising awareness about health issues was a bonus! Crossing the finishing line and seeing all the supporters there for us and  then holding up the Nepali flag as a team, it hit me what a huge success the day was for NAFA. Great things are possible when passionate people get together to do something good”.

Having first-hand experience of the struggle for rural Nepalese to access good health care, motivated Shambhu to train hard for the 10 km run. Joining the Everest mob in the Brisbane marathon was: “A great experience and achievement of my life, and complete satisfaction to me.   Working with NAFA was a big lesson. If we work in a team and everyone in the team puts in a small effort then we can make a huge difference in other people’s life”. 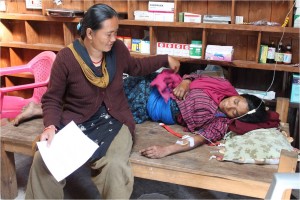 Nathan is also passionate about the need for health care in remote areas of Nepal. He found the whole experience of doing the half marathon and fundraising inspiring: “It was great to see so many people together pushing the limits of their endurance. We can sometimes surprise ourselves in what can be achieved when we commit and put our mind to it”.
Deborah’s relationship with the health workers in the remote village of Tawal kept her motivated to train for the 10 km run: “The sheer exhilaration of running with a dedicated team for a cause so dear to my heart made this fundraiser very special. I have vivid memories of the locally based health workers at Tawal doing everything from stitching serious wounds, to keeping mothers and babies healthy”.
It’s never too early to get involved with helping others. Our youngest team members, four year olds Aishling and Heidi, happily ran the mini-marathon and raised over $1,100 between them!

The Nepalese Association of Queensland (NAQ) supported the idea and contributed to the cost of setting up the GoFundraise website. Sudipta, Deborah and Kylie managed the fundraiser. Mana, Achut, Keshab and Nirmala promoted the event within the Nepalese community. On the day we had a great support team to cheer us on and others joined in to run with the Everest Mob.

A big thank you to all the team members who raised funds and all the sponsors out there who supported them so generously: 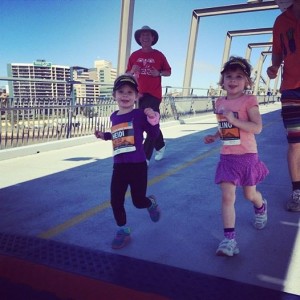 Heidi and Aishling on the run

Thanks also to the Tibetan kitchen, Dello Mano and Bellissimo for donated prizes. We could not have achieved this outcome without the help of all involved – thank you for your magnificent support!

Donations can still be made if there is anyone else out there who wants to reward our intrepid runners’ efforts http://brisbanemarathonfestival2014.gofundraise.com.au/page/SinnyaSudipta