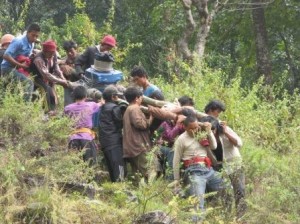 Volunteer labour from individual families was a major factor in the success of the project over the 8 month construction period. Every family carried an allocated number of kgs of sand, stones, cement, wire, wooden/metal poles and pipes, electrical-mechanical equipment and other materials to the site from the riverbed and road-head. 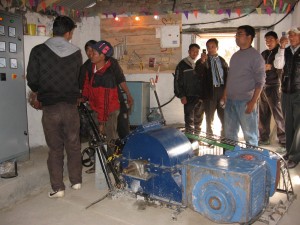 During construction in November, we witnessed women carrying 45 kg bags of sand from the river (a 2 hour down and 4-5 hour up trip) and 22 men carrying the generator that weighed nearly 300 kgs from the road-head. They said it took them 4 days to carry it to the site and this was after a 3 day trip to carry the 320 kg turbine.

240-250 houses will be connected by the end of February for electricity as well as two schools and a health clinic. In addition, small businesses will be established with applications for electricity connection for a furniture business and a grain mill already in process.  The two operators of the system (Ashok and Kipa) have both received NAFA sponsored 6 month electric wiring training and will receive further micro-hydro specific training organised by REDP. 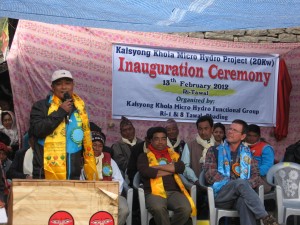 At the opening ceremony Mr Shrestha said in his speech that projects of this size (20 KW) often take 2-3 years to complete and are often more than two times over budget due to problems at the community level with volunteer labor, local expertise etc.  He said it was a credit to the Tawal community that they completed the project in line with the originally projected timeline and very close (within 3%) of the original budget.  Thank you to all those who contributed to both the Tawal and Lumsa projects and congratulations to both communities for achieving such a significant development goal.